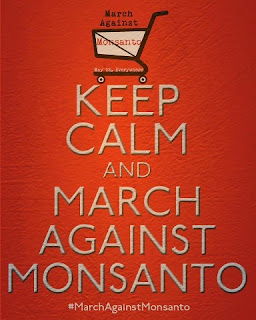 Two million people in 436 cities in 52 countries marched on Memorial Day 2013 in protest against Monsanto Co., a NYSE biotechnology corporation with nearly $12 billion in annual revenues.

Yet, most Americans are clueless about Monsanto, its products, its policies, its protesters...  and clueless about how Monsanto directly dictates the quality and content of most food consumed by their families.

So, my friends, here are a few very basic facts about Monsanto, and why you should care about this ultimate fake-food manufacturer's poisonous products.

1. Agent Orange was jointly manufactured by Monsanto and Dow Chemical. Agent Orange, a lethally toxic herbicide and defoliant, was used by the U.S. military in Vietnam for 6,542 "spraying missions" of forests, foliage, and food crops over ten years.

"Vietnam estimates 400,000 people were killed or maimed, and 500,000 children born with birth defects as a result of its use. The Red Cross of Vietnam estimates that up to 1 million people are disabled or have health problems due to Agent Orange." (Source - Wikipedia entry for Agent Orange)

Agent Orange has also severely affected the health of 3 million U.S. troops and their families. "Despite the widespread health impact, Monsanto and Dow were allowed to appeal for and receive financial protection from the U.S. government against veterans seeking compensation for their exposure to Agent Orange." (Source - GMO Health)

2.  DDT, PCBs, and dioxin-based pesticides, herbicides, and insecticides are among the intentionally toxic products manufactured by Monsanto over decades, and used as long as legally possible, regardless of scientific findings and medical results.  Dioxin was the active ingredient in Monsanto's Agent Orange.

3. RoundUp (glysophate) is Monsanto's successor herbicide to DDT, after DDT use in the U.S. was banned in 1972.  RoundUp is so profoundly toxic that it could eradicate weeds nearly overnight.  Farmers worldwide were induced and enticed to rely on RoundUp to protect their fields.  However, crops predictably withered under a virulent blanket of RoundUp.

Read more »
Posted by Deborah White at 7:38 AM No comments: 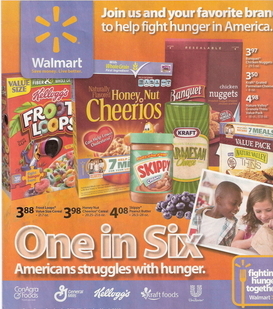 The hypocrisy and cynical irony are almost too rich for words. Extreme, ethics-free capitalism at its finest...

Hunger is defined as "... the physical sensation of desiring food. When politicians, relief workers and social scientists talk about people suffering from hunger, they usually refer to those who are unable to eat sufficient food to meet their basic nutritional needs for sustained periods of time." on Wikipedia.

With this ad late last month, Walmart urged Americans to join in "fighting hunger together" by buying products in its store, made by the leading fake food mega-corporations:

"In 2010, Walmart and the Walmart Foundation made a historic $2 billion commitment to fight hunger in America through cash and in-kind donations. The Fighting Hunger Together leverages Walmart and the Walmart Foundation’s size and scale to provide nutritious food and funding to nonprofits that are committed to finding solutions for this important issue."

This clever ad campaign leaves the clear impression that Walmart and its fake-food corporate suppliers are fighting hunger.  Truth is that nowhere does Walmart state that it or its partners "are committed to finding solutions for this important issue."

Instead, Walmart appears to promise to donate a tiny portion of cash (see the list of nonprofits here) from sales to Americans of highly-processed fake foods  manufactured by its "partners" including:

"In-kind donations" by Walmart and its mega-corporate food suppliers means that a majority of their joint "$2 Billion commitment" will be their own fake food products... Froot Loops, Skippy peanut butter, Banquet chicken nuggets, canned Kraft cheese, Nature Valley bars, Honey Nut Cheerios, and the like... to food banks, charities, and soup kitchens serving the hungry in their communities.

If hungry Americans dine mainly on fake-food product donations, then, by definition, they will remain hungry, as Froot Loops, Skippy peanut butter, Banquet chicken nuggets, canned Kraft cheese, Honey Nut Cheerios, and all other highly processed foods do not meet their basic nutritional needs for sustained periods of time. Not by a long shot...

Such processed fake foods are chock full of fat, salt, and sugar, as well as chemicals, additives, fillers, emulsifiers, artificial  colors and flavors, and much more. .

Walmart's "fighting hunger together" campaign is sheer gimmickry genius in that it equates Walmart with fighting hunger, yet requires nearly no sacrifice of one the world's largest corporations beyond increasing sales of its products.  And Walmart gets humanitarian brownie-points by donating products approaching "must sell" dates or the end of shelf life...

Indeed, a fine example of ethics-free capitalism.  Problem is... the hungry are still hungry!