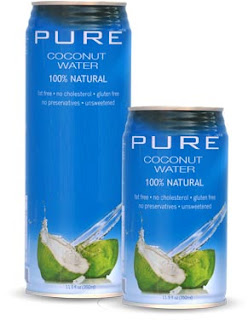 Coconut water is one of the hottest health food trends, with more than $400 million in U.S. sales in 2011. Sales have doubled each year since, 2005, according to the Wall Street Journal.

But is coconut water the perfect-food elixir touted by its celebrity backers, or the newest blip in health food hucksterism? Or are boasts about coconut water the stuff of quasi-fraud baloney, like past food-fads acai berry and raspberry ketones?

I recently bought a plethora of coconut water products and brands in cans, bottles, boxes... and my appraisal of the lot brought more questions than answers, and found more clever ambiguities and suspiciously slick marketing ploys than clear or verifiable facts.

And despite adorable "cute discovery" stories on the websites of entrepreneurs of these home-grown enterprises, I uncovered deep-pocketed connections to the largest U.S. industrial beverage corporations. Connections not revealed to the consumer on lushly alluring but largely fact-free packaging or on corporate websites.


What Is Genuine Coconut Water?

Coconut water, in its purest, real-food form, is the clear liquid inside young, still-green coconuts, which are fruits of the coconut palm.


"Coconut water has a high potassium content and contains antioxidants... Fresh coconuts for drinking are typically harvested from the tree while they are green. A hole may be bored into the coconut to provide access to the liquid and meat...

"In recent years, coconut water has been marketed as a natural energy or sports drink due to its high potassium and mineral content. Marketers have also promoted coconut water for having no fat and very low amounts of carbohydrates, calories, and sodium. However, marketing claims attributing tremendous health benefits to coconut water are largely unfounded." (Source - Wikipedia)

What Is Packaged, Marketed Coconut Water?
Scrutiny of VitaCoco, my priciest purchase at $4.99 for 33.8 fluid ounces, found the high-quality tetra-packaging festooned with legally and nutritionally meaningless phrases:
"Natural" is a legally meaningless term, that can mean anything, from bugs or sugar to dirt, dog hair, and any and all dairy products (and by-products).
"Natural" means nothing.... which, of course, is why modern industrial food corporations use the word endlessly: to impart purity, without necessarily achieving any such thing. But I digress...

Two revealing VitaCoco disclosures in tiniest print on the enticing sapphire, azure, and lime box: "Produced for All Market, Inc." and "Produced in Indonesia." 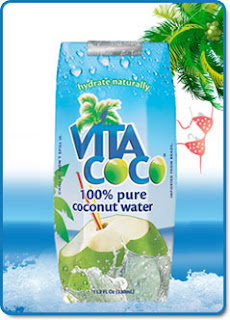 Fact: the FDA performs little to no testing of ingredients in imported foods. Also, since VitaCoco was produced FOR and not BY the U.S. holding corporation, the two Manhattan-based founders and their Wall Street investors can legally plead ignorance should their "coconut water" prove to be less than... well, "100% pure, never from concentrate, like sticking a straw in a coconut."

Fact: Another fascinating fact VitaCoco never discloses on the website or products: a major investment by a private equity fund of Anheuser-Busch founding families, and a powerful 2010 distribution deal with the Dr. Pepper-Snapple group (Source - Crains New York).

VitaCoco may camouflage its corporate connections in the look and lingo of small business coziness, but make no mistake: Vitacoco and other coconut water products are backed by U.S. industrial food corporations and Wall Street bankers.

Fact: In 2011, VitaCoco "agreed to pay $10 million to settle a consumer lawsuit sparked by the ConsumerLab report... Vita Coco, which didn't admit wrongdoing, said nutritional levels can vary in an all-natural product but that it is tweaking its labeling. PepsiCo, which has an option to buy 100% of O.N.E., is involved in a similar suit over labeling but declined to comment on the ConsumerLab report...

"U.S.-based ConsumerLab.com reported last year that some samples it tested of Vita Coco and O.N.E. had significantly less sodium, an important electrolyte lost through sweat, than advertised on the labels or found in Gatorade." (Source - Wall Street Journal, Feb 11, 2012)

Fact: VitaCoco's products, packaging, marketing, and implied claims are no different than its top competitors, Zico ("pure premium coconut water"), which is partially owned by Coca-Cola Corp., and O.N.E., part of PepsiCo Inc.

Unanswered Questions, Undisclosed Facts?
What comprises the "coconut water" filling these cans, bottles, and boxes lining the shelves at markets, health food stores, yoga studios, and soon, at all Walgreens, CVS, and 7-Eleven. (Coconut water can even be bought at Amazon!)

But what is the sole ingredient "natural coconut water," and how has it been processed?


One commenter at a 2011 CNN story claimed "I worked for a company that manufactured coconut water products," and reported that the concoction is "frozen coconut water of miniscule amount, added coconut flavor and many additional additives. Average cost to manufacture: 47 cents."

Have sugar or salt, in any form, been added? If so, why are such  taste additives not openly listed among ingredients?

In beverages owned and/or distributed by Coca-Cola, PepsiCo, and Dr. Pepper-Snapple? In beverages manufactured in countries as Thailand and Indonesia, for which the US FDA does virtually no testing?  Really?

Over-Hyped Huckster Claims?
Extols the Pure Coconut Water website about its coconut water, "A natural isotonic beverage with an electrolyte balance that is identical to human blood—you couldn’t invent a better whole health beverage!... Get your electrolytes and athletic recovery nutrients from a single-ingredient, 100% NATURAL source."

Benefits listed of "Pure Coconut Water" (which they cleverly don't actually claim of their product) include:

"Pure coconut water  is an ideal drink if you want to hydrate your body... Drinking pure coconut water has been discovered to give benefits in the area of helping you shed unwanted pounds....  Tropical cultures know all about the weight-loss benefits, as well as other benefits of pure coconut water, because they have been using it for centuries.

Hucksterism at its American finest? Possible quasi-fraud baloney, like past food-fads acai berry and raspberry ketones?

You'll have to judge for yourself, as there are:
As for me and my husband, we plan to save our hard-earned wages and, instead, drink water, unadorned, to meet our hydration needs.

After all, there is no hydration difference between water and pricey, packaged coconut waters per a 2012 scientific study by the Journal of the International Society of Sports Nutrition.
(Read the study HERE.)

Posted by Deborah White at 7:18 AM