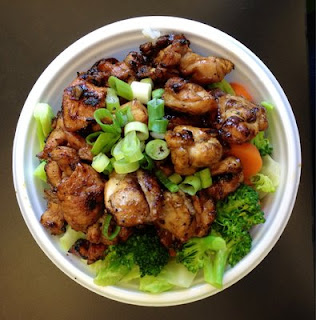 "Flame Broiler" exclaimed my favorite eight-year-old when I asked where she'd like to have lunch.  "I love Flame Broiler!" she exuded, once she realized that Chuck E. Cheese wasn't an option on our fun but busy school-shopping day together.

"Huh?" I wondered. "Not McDonalds with their new Despicable Me 2 toys? The gigantic in-door playground? She dives with gusto into those greasy chicken nuggets and fries."

Is this the same girl who, two years ago, adamantly refused to eat anything green, especially broccoli?

I was startled.  After all, this is a smart girl who's plugged into third-grade trends. Every cool gadget and toy. The best "in" spot for birthday parties.  The newest movies and TV shows for kids. Gabriela always knows...


Flame Broiler instead of McDonalds? That low-key fast-food eatery that bills itself as "The Healthy Option"? I'd never been to one, but was certain I'd seen a couple in our suburban town.

Gabriela knew the menu, and proudly explained it to me.  Flame Broiler serves three simple options, in three sizes, over white or brown rice:

Condiments offered are green onions, jalapenos, "magic" sauce, and hot sauce.  The 142-outlet regional fast food company promises "No dairy. No frying. No trans fats. No skin. No MSG." and:

"Our commitment to friendly service, a clean and inviting environment, and healthy food served fast has already won the approval of our customers of all ethnicities. Also, for health's sake, we are working towards the goal of serving all organic, 100% natural food. Not perfect, but always working towards perfection!"

The beef and chicken were quite delicious, albeit a bit salty. The rice was fluffy and perfectly done. The veggies weren't soggy, over-cooked messes, but steamed, crisp, and  freshly colorful. (Note: The ultra-tasty "magic" sauce is akin to a syrupy teriyaki concoction, and boasts 60 calories and 480 mg of sodium in a very tiny container.)

Gab savored our lunch together with her trademark exuberance, and so did I.  I silently marveled again at Gab's wise parents, my son and her mother. And am grateful for the all-encompassing nutrition agenda at her elementary school.

Are kids making healthier food choices these days?  Is ever-aware Gabriela a harbinger of yet another trend?


"Younger children had the highest levels of physical activity and fruit and vegetable consumption. But as children got older, the frequency of eating junk foods and engaging in sedentary behaviors crept up... Teenagers also reported drinking slightly fewer soft drinks and eating less candy.

"In the past year, other studies have hinted at improvements in the obesity rate among younger children, with some even showing a decline in some cities... Dr. Iannotti said the findings seemed to suggest a pattern. 'I think the public health message is beginning to be accepted,' he said."

That kids are voluntarily making healthier food choices is good news for for their physical and mental health, and thus, good news for the health of our nation.

But it's also superb news that powerful, pervasive advertising by industrial food mega-corporations... McDonalds and Burger King, makers of highly processed cereals, soft drinks, and the like...  is fading in influence over our children.

I can't imagine better fake-food news. Can you? 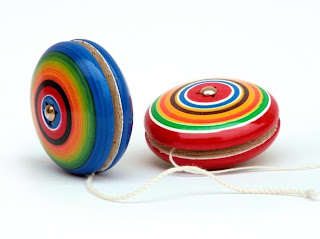 Americans have been bamboozled by leading diet corporations. Hookwinked. Tricked. Lured into bleeding endless streams of cash into the coffers of companies who profess to help us become healthier.

Turns out top diet conglomerates don't want you to become lean. At least, not for very long... After all, once you're slim, you no longer need their pricey services. They lose a paying customer.

So what's a clever, profit-hungry corporation based, in part, on the diet industry to do to bring once-chubby customers back?   Believe it or not, if you answered "Make 'em chubby again," you're correct.

If you responded "Trigger yo-yo dieting instincts by igniting cravings for salt, sugar, and fat," you win the prize.

Once you graduate from chubby to lean or grow from lean to chubby, industrial fake-food corporations don't want to lose your business.  So they cynically diversify their portfolios to include both diet companies and junk food companies, and constantly lure Americans into unhealthy yo-yo- dieting, hence a continuous flow of hefty corporate profits. 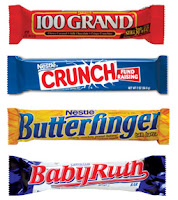 Take Jenny Craig Inc, owned since 2006 by Nestle, which reported worldwide sales of $92 billion and profits of $10.6 billion in 2012.  Besides "weight management" company Jenny Craig, Nestle owns or controls hordes of less-than-healthy foods including:


Consider SlimFast, maker of "meal option" shakes, snacks, and packaged foods meant to help people better manage their weight.  SlimFast was quietly acquired by Unilever in 2000.  Other food companies owned or controlled by Unilever include: 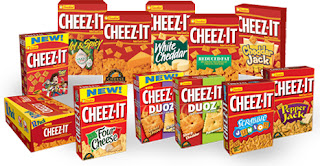 While little is publicly known about Invus' client list, its website also describes a successful investment in and turn-around of Keebler, which was later sold to Kellogg.  Keebler is the largest cookie and cracker manufacturer in the United States. Among Keebler highly processed products are Cheez-Its and Wheatables crackers and eight varieties of Chips Deluxe cookies.

Yes, Americans (and Europeans, too) have been bamboozled by some leading "weight management" corporations into believing that they have our health at heart.

And so the yo-yo dieting cycle continues. Lean, chubby, lean, chubby.  And the same industrial food mega-corporations profit handsomely from both unhealthy sides of the cycle.

Only the consumer gets hurt... financially and personally.  Hurt by their own human weaknesses and natural reactions.  Lured like a hungry mouse to a cheese-laden trap.   Seduced into an endless culinary cycle of temptation and guilt, binge and purge, sin and redemption.

It's a brilliant bamboozle, worthy of the sharpest flim-flam artists in American retail history.  A type of bait-and-switch trick that's engineered to be nearly irresistible to a public enamored of its junk food habits.

And as long as consumers continue to take the fake-food diet-industry bait, this destructive, greedy cycle will continue to flourish.

Posted by Deborah White at 7:26 AM No comments: 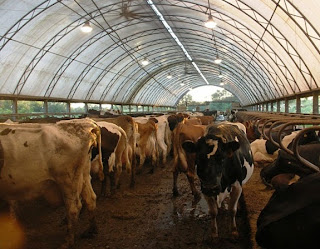 Some great news, and a caution, from state lawmakers as the U.S. Congress remains mired in gridlock, bickering, and indecision...

"Ag -gag" bills were killed in all 11 states pondering punitive measures for truth-telling by journalists and activists about factory farming practices.

In 2013, CAFO-grown animals account for more than 85% of all beef, pork,  and poultry sold for human consumption in the United States.  A plethora of major public health and environmental hazards can be directly traced to CAFO's, including:
For more, click these links to see Contaminated Meats in Grocery Markets Grow Due to Gag Laws (Fake Food Watch) and Concentrated Animal Feeding Operations (Wikipedia).

The "model" ag-gag law, drafted in 2002 by controversial pro-corporate lobbyist group ALEC, makes a crime of "entering an animal or research facility to take pictures by photograph, video camera, or other means with the intent to commit criminal activities or to defame the facility or owner." 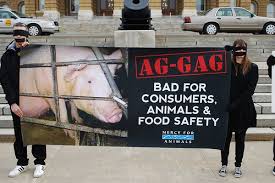 The great news is that the political tide is turning against ag-gag laws. Thanks to public pressure and that of public interest groups, state-level politicians have been forced to ignore the demands of wealthy meat-industry donors... and instead legislate for public good!

Commented Nancy Perry, senior vice-president of the American Society of Prevention of Cruelty to Animals (ASPCA) to Food Safely News:

"We hope the defeat of these 11 bills encourages lawmakers to shift their focus toward achieving accountability for those who are inflicting abuse on animals and putting consumers at risk instead of focusing on misleading efforts to suppress whistleblowers who want to expose those problems."

Caution!  Don't assume, though, that the threat from ag-gag laws has been neutered.  In Pennsylvania this year, the fracking industry attempted to have passed the nation's first ag-gag law "to criminalize anti-fracking activists who seek to expose environmental harms brought on by the gas drilling industry."

Posted by Deborah White at 2:48 PM No comments: