Contaminated Meats in Grocery Markets Grow Due to Gag Laws 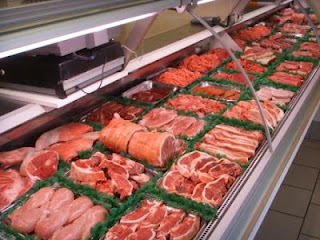 The beef, pork, and poultry you buy at the market is more likely from a diseased animal because of laws in five states severely restricting free speech about meat-industry factory farms.

Iowa, Utah, North Dakota, Montana, and Kansas legislatures have all passed "ag-gag laws," a moniker earned because of extreme pressure from agriculture industry ("Big Ag") lobbyists to pass such statutes.

"In North Dakota, it is a class B misdemeanor to enter an animal facility and use or attempt to use a camera, video recorder, or any other video or audio recording device... Violators face jail terms of 30 days."


In Kansas, it's "a class A, nonperson misdemeanor  to enter an animal facility that is not open to the public and take pictures or video."

In Montana, the law "makes it unlawful to enter an animal facility to take pictures by photograph, video camera, or other means with intent to commit 'criminal defamation'..."

In Iowa, the newly passed ag-law law gives "county sheriffs a long list of possible violations to charge once it is disclosed that any filming or recording was done without the permission of the animal facility owner."

In Utah, the new 2012 law bans "photographing farm animals or operations without permission or 'under false pretenses,' and could lead to jail sentences of up to a year and/or fines of up to $2,500 for violators."

Ag-gag laws are dangerous to the American public because of...


"According to a nationwide study..., meat and poultry from U.S.grocery stores have an unexpectedly high rate of dangerous disease-causing bacteria, including antibiotic resistant superbugs. In fact, almost half (47 percent) of all meat and poultry samples tests were contaminated with S. aureus.

"What's more, 52 percent of these contaminated meats contained superbugs, meaning the bacteria were resistant to multiple classes of antibiotics.That adds up to multi-antibiotic resistant Staph germs being present in about one out of every 4 samples of meat,chicken or turkey." (Source - Natural News, April 16, 2011)

Killing  Freedom of Speech - Clamping down on constitutional freedoms of speech and press that allow journalists to inform the public about profound abuses and threats to public health.

Horrific Working Conditions - Horrific working conditions for the workers, most who are fearful immigrants, documented and undocumented, and vulnerable to predatory employers

Observes the ASPCA, "While state and federal laws require large farms to minimize their environmental damage, farms have been found flagrantly violating these requirements. Undercover investigations offer an effective way to expose such violations."

What Can You Do?

But the most important step you can take to protect our U.S. meat supply is to educate yourself and family, friends and neighbors on this crucial public health issue.

As a plain-spoken starting point, I recommend the can't-put-it-down book that first opened my eyes, "Eating Animals" by Jonathan Safran Foer

and "Everything Is Illuminated

And please, protect your family's health by eating less meat from industrial livestock factory farms... which is more than 95% of all meats sold in American grocery stores today.