"The promotion of energy-dense, nutrient-poor products by some of the world’s most physically fit and well-known athletes is an ironic combination that sends mixed messages about diet and health."

That's muted academic-speak to say that professional athletes are hypocrites for endorsing junk food. But endorse they do... to the tune of millions of dollars in rich endorsement deals.

The fascinating study, published in the Pediatrics journal in November 2013, found that of the 100 professional athletes with the highest-value endorsements in 2010:

LeBron James, NBA superstar, "received $5 million to endorse Bubblicious Gum, including his own flavor, LeBron's Lightening Lemonade," in addition to his lucrative contracts with McDonalds, Sprite, and Powerade.

Dale Earnhardt, Jr., NASCAR driver, is paid to shill for Mountain Dew, Hellman's/Best Foods Mayonnaise, and Amp Energy, a "flavor extension of the Mountain Dew brand", which is owned by PepsiCo.

Without exception, professional athletes promoting "energy-dense, nutrient-poor products" are extraordinarily fit physically, and must adhere to a disciplined, health-conscious diet.

Yet, the food and beverages they endorse to Americans... particularly to U.S. children... are unhealthy.

Which, of course, is why fake-food corporations dangle million-dollar contracts to entice popular athletes to lend cache and credibility to their unhealthy fare.  And per the study, "research shows that athlete endorsements are associated with higher healthfulness ratings on the products they endorse."

Greedy industrial food mega-corporations will do what it takes to sell their highly processed, salty, sugary, fatty food products. That's a sad given in 2013.

But professional athletes know better. In their own lives, they do better. But certain athletes choose to enrich themselves by hawking an unhealthy dietary mantra to the American public.

Exhorted the study, "The promotion of energy-dense, nutrient-poor products by some of the world’s most physically fit and well-known athletes is an ironic combination that sends mixed messages about diet and health."

Indeed! I wonder... do these athletes feed a steady diet of fast food, soft drinks, and junk food to their children and loved ones? 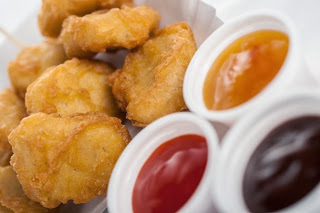 Chicken nuggets, a food scientist's invention first sold in 1980, are a gargantuan American industrial-foods sales success far beyond the initial imaginations of even fake-food corporate executives.

Billions of chicken nuggets have been sold in every U.S. supermarket, served in all family-style restaurants, and are essentials on fast-food menus.

First and foremost, chicken nuggets are widely seen as healthier kid-friendly options than greasy cheeseburgers in spongy white-bread buns.   Nuggets are purposely formed to fit a kid's hand. Compact, easy to hold and handle, ubiquitous in generic taste and look... nuggets are a perfect, extra-fast food for even the fussiest kids and busiest families. A no-brainer when ordering or fixing a quick meal while on-the-run.

Parents feel good about ordering McDonald's Mighty Kids Meals with chicken nuggets, apple slices, less fries, and milk for their children. Chicken nuggets are viewed by parents as the white meat alternative to red-meat health concerns, first voiced in 1977 by the federal government.

Ordering chicken nuggets for kids might be a convenient no-brainer. But switching on skeptical parental brains would reveal the inconvenient reality that these golden industrial-made orbs are:
McDonald's Chicken McNuggets, for instance, contain 25 ingredients, including heavy doses of salt, fat, and sugar, and chemical additives, preservatives, and flavor enhancers. That's before salty, sugary dipping sauces. 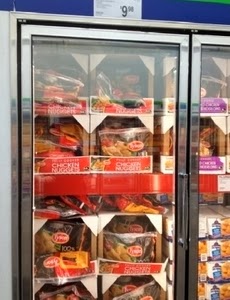 And the chicken in chicken nuggets? Only about 18% of a nugget is actual meat protein, per two doctors at the University of Mississippi Medical Center." The rest of the "meat" in a chicken nuggets? A slurry of chicken parts, similar to pink slime, made of ground:
In short, "stuff that usually ends up in dog food," per NPR. Chicken nuggets would be accurately be tagged as "fat nuggets," commented Dr. Richard deShazo, professor of pediatics and one of the article's authors.

Those chicken nuggets you serve to your beloved brood? Not much more than pulverized chicken leftovers (plus a smidge of actual meat), mixed with fat, salt, and sugar, and topped with a big dollop of the usual chemicals found in highly processed, highly profitable meat products.

My suggestion? If the kids crave chicken nuggets, a better, far healthier idea is to create them at home. Recipes abound, including more than a dozen delicious, easy, free ideas at  AllRecipes.com.

Meanwhile, don't fool yourself that industrial-made chicken nuggets are healthy kid-friendly food options. They're not. Fast-food and supermarket chicken nuggets are just one more fake-food industrial product larded with addicting fat, salt and sugar, and loaded with chemical additives, emulsifiers, preservatives, and fillers.

And billions in corporate profits.

Foster Farms Chicken Contamination Not Due to Gov't Shutdown, Is Repeat Offender 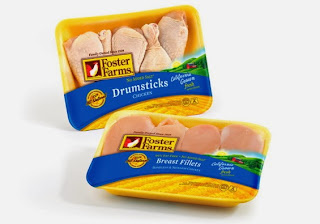 Contrary to misleading headlines, the salmonella outbreak at three Foster Farms chicken processing plants was not due to the federal government shutdown.

The spread of antibiotic-resistant salmonella is directly due to corporate industrial processing of supermarket chickens. These operations routinely process and sell poultry infested with poisons and toxins, including e.Coli.


"I used to stock-up on chickens at cheap prices and freeze them for future use.  Five years ago, I roasted at least two supermarket birds weekly to feed my then family of three.  No more. Today, I'm nauseous at the thought of buying, handling, and particularly serving these contaminated industrial food products.

"What changed? I got educated on the hidden, ugly, unhealthy realities of industrial-produced chickens. Despite 'natural"'appearances, they're a particularly disgusting food product of the industrial fake-food industry."   (Click link HERE or above to read the grotesque facts about four-step industrial processing of chickens.)

As of last week, 317 people were reported by the USDA as very sickened by Foster Farms chickens processed at three California plants. Half of the 317 were hospitalized.  The public health rule-of-thumb is that 20 people are sickened for each officially reported illness from contaminated food.

Foster Farms has been charged before with producing infected chickens destined for supermarket sales. Yet the USDA continued to allow Foster Farms to sell its tainted products.


"Foster Farms is no stranger to CDC studies. The Northwest company has been struggling with this problem for some years. According to the CDC report, Foster Farms chicken was found to be infected with the Heidelberg strain in 2004 and again in 2012. The 2012 outbreak, which is still being tracked, led the CDC to investigate the problem...

"The USDA knew it needed to address this problem urgently, says the report, so in December 2012, the “USDA-FSIS announced that all establishments producing not-ready-to-eat ground or comminuted poultry products, including Foster Farms, will be required to reassess their Hazard Analysis and Critical Control Points plans.

"But was the USDA-FSIS monitoring the implementation of that plan? Was the agency’s own “hazard analysis” plan upgraded to meet the increased need? And if it was, how did the USDA-FSIS miss the ongoing, and apparently rampant, presence of salmonella Heidelberg in packaged products?" (Source - Triple Pundit: People. Planet, Profits) 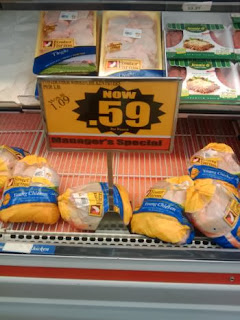 The USDA-blessed fix for Foster Farms' latest sickening of consumers?

Despite previous (obviously empty!) threats, USDA inspectors allowed the three California plants in question to remain open for business while they "investigated." Reports Mark Bittman in the New York Times:


"Three days later, Foster Farms 'submitted and implemented immediate substantive changes to their slaughter and processing to allow for continued operations.' What’s that mean? 'We cannot tell you what their interventions are, because that’s a proprietary issue,' said Englejohn, adding that the interventions comprise 'additional sanitary measures that reduce contamination.'

"Well, we hope so.  Meanwhile, commerce continues and the chicken is out there. Will it be taken off the market after 800 people get sick? Or 1,200? Or when someone dies?"

Is this latest widespread incident of public sickening from contaminated Foster Farms chicken over? We, the American public, do not know.

This we do know:


Read Supermarket Chickens Laced with Bacteria, Feces, Chemicals for succinct info about how each of the four steps in industrial processing of chickens contributes to contamination of poultry sold in supermarkets across the nation.  I also offer suggestions on buying uncontaminated chickens at butcher shops, Whole Foods stores, and the like.

And please... for your health and that of your loved ones... bypass supermarket chickens. They're a particularly disgusting food product of the industrial fake-food industry, whether or not the federal government is shutdown. 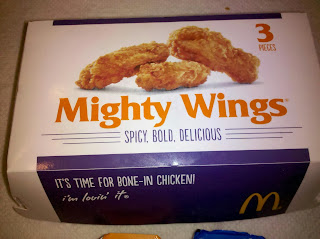 McDonald's persists as the devious poster child for what's wrong with the American fast food mega-industry....

Not just because it's the world's largest fast food corporation, which it is with $28 billion in U.S. sales and 34,000 outlets worldwide in 2012.

And not just because the unhealthiness of its food is legendary. McDonald's greasy fare is intentionally larded with addicting doses of fat, salt, and sugar to create a permanent customer base.

But because McDonald's is quite extreme in its single-minded, often stealth corporate goal of profits over people. public health be damned.

McDonald's Mighty Wings, newly introduced at the advent of wing-chomping football season. "Mighty Wings are basically McNuggets With Choking Hazards," commented one NPR on-air host. "I was as surprised to find an actual bone in this as I would be to find a bone in a banana," quipped another.

Bones in Mighty Wings are about as natural as McDonald's ribless McRib sandwich.

Mighty Wings are three, five, or ten "pieces" (McDonald's website lingo) per box, with the same ranch, barbecue, or honey mustard sauces used for Chicken McNuggets. Ten Mighty Wings have 960 calories, 60 grams of fat, and a whopping 2,900 mgs. of sodium (salt), 121% of the recommended daily salt intake for an adult.

The Center for Science in the Public Interest naively penned:


"Ronald McDonald’s slow march toward healthier meals made a major advance today... Getting soda out of Happy Meals is historic progress that should immediately be adopted by Burger King, Wendy’s, and other chains. Soda and other sugar drinks are leading promoters of obesity and diabetes and one day it will seem crazy that restaurants ever made this junk the default beverage for kids."

"Who would pay $4.79 for a sandwich when the two sandwiches on the Dollar Menu are perfectly good?” defended one McDonald's consultant to Time magazine. Indeed, what foolish consumer would actually expect a quasi-quality sandwich at McDonald's? Nobody, now. 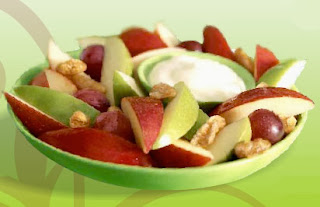 Disappearing salads on McDonald's menus include its Fruit & Walnut Salad, which was quietly dropped along with Angus burgers.  The Fruit & Walnut Salad was genuinely delicious with "wedges of crisp apples, juicy red grapes, candied walnuts and our low-fat vanilla yogurt,"

This near-invisible menu marketing ensures that premium salads will rarely be ordered in lieu of more profitable, more addictive,  carb-heavy burgers, fries, wraps, desserts, and sugar-drenched drinks. Look for premium salads to likely also be dropped because sales were low.

We must begrudgingly admire McDonald's though, for disciplined corporate consistency. Consistency in:

And consistency in extraordinary corporate profitability at the direct expense of public health.

There's a reason why McDonald's persists as the devious poster child for what's wrong with the American fast food mega-industry: they've earned and deserve it.

My only question: when will Americans finally stop supporting McDonald's profits-over-people agenda for our nation's health? For our children?