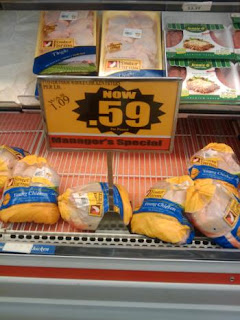 Chickens are supermarket bargains for the budget-conscious, often priced as low as $3 and rarely more than $7 per semi-frozen bird or package of choice parts. Shoppers feel relieved to find a source of inexpensive protein for delicious, popular dishes.

I used to stock-up on chickens at cheap prices and freeze them for future use.  Five years ago, I roasted at least two supermarket birds weekly to feed my then family of three.

No more. Today, I'm nauseous at the thought of buying, handling, and particularly serving these contaminated industrial food products.

What changed? I got educated on the hidden, ugly, unhealthy realities of industrial-produced chickens. Despite "natural" appearances, they're a particularly disgusting food product of the industrial fake-food industry.

Per Physicians Committee for Responsible Medicine:


"'More and more people are realizing that chicken is anything but a healthful, wholesome food,' says Joseph Gonzales R.D., L.D., a registered dietitian with the Physicians Committee. 'Adding grilled chicken to your salad or sandwich can actually add carcinogens, chlorine, cholesterol, superbugs—and worst of all, feces.'"


Health and culinary professionals urge that home cooks wash their hands, utensils, and cutting boards thoroughly after handling chicken products... because the chicken is laced with toxic contamination that could cause dangerous infections or illnesses.

The four-step basics of industrial processing of non-organic broiler chickens, which comprise 99% of chickens eaten by Americans, are:

Step One - Growing chickens, which takes place in crowded, windowless, enclosed buildings that house about 25,000 chickens.


"New Yorker writer Michael Specter wrote... in 2003 on his first visit to a broiler factory farm, “I was almost knocked to the ground by the overpowering smell of feces and ammonia. My eyes burned and so did my lungs, and I could neither see nor breathe….There must have been thirty thousand chickens sitting silently on the floor in front of me. They didn’t move, didn’t cluck. They were almost like statues of chickens, living in nearly total darkness, and they would spend every minute of their six-week lives that way.”

"That was nearly ten years ago and still remains the last time the public saw in any detail the life of a factory farmed broiler chicken in the U.S." (Source - Food Safety News, January 24, 2013) 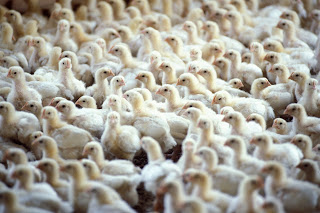 
"What starts off as a seemingly spacious, clean (though barren and dimly lit) environment, soon changes. A full 25,000 individual animals defecate in the same enclosed space for 45 days. They get a lot bigger, rapidly growing from the size of your fist to the size of a soccer ball in that short period. They crowd that space as they grow, with each individual only having space equivalent to less than a piece of 8”x11” paper.

"It is a sea of chickens from wall to wall, sitting in their own feces, struggling to move, in large part because of their genetics. The modern broiler chicken is unnaturally large and has been bred to grow at a fast rate"

Step Two - Slaughtering the Chickens, which is often squalid and grotesque, especially at the largest corporate-owned processing plants that slaughter up to 30,000 chickens hourly.  Briefly, the large-scale industrial slaughtering process is...

"A typical large processing plant may slaughter more than a million birds per week. There, chickens are stunned, killed, bled, and sent through scalding tanks, which help remove feathers but also act as reservoirs that transfer feces from one carcass to another.

"After scalding, feathers and intestines are mechanically removed. Intestinal contents can spill onto machinery and contaminate the muscles and organs of the chicken and those processed afterward. The eviscerated carcasses are then rinsed with chlorinated water... " (Source - Physicians Committee for Responsible Medicine, April 2012)

Other chemical rinses commonly used for the carcasses include trisodium phosphate and  acidified sodium chlorite.

Step Three - Inspection of Slaughtered Chickens, which are presently required to include 4 USDA inspectors who must review for "quality defects" in a line that processes up to 140 chicken carcasses per minute., an astonishing inspection rate requirement.


"Besides feathers, those 'quality defects' that will be turned over to company-paid employees to inspect under the new system include: fecal contamination; digestive content; improper evisceration where organs, such as intestines, are still in the carcass; and disease conditions, such as septicemia and toxemia.

"According to the proposed rule, the company-paid 'inspectors' do not have to be trained to assume these duties, while USDA inspectors are trained to work on poultry slaughter lines." (Source - Food Safety News, May 8, 2013)

Step Four -  Communal Bath for Slaughtered Chickens, which typically lasts for an hour, after which the chicken is prepared for retailers:


"After the visual check for fecal matter, carcasses are typically chilled in ice water, effectively a communal bath in which feces spread from bird to bird. After chilling, a chicken may be cut up, allowing for further fecal spread from carcass to implements..."

A main goal of the communal bath is not just to wash the carcasses, but to add about one-quarter pound of weight via absorption. Explained a former Agriculture Department undersecretary, "Since chicken is sold by the pound, over a period of time it’s a substantial financial difference to the company." 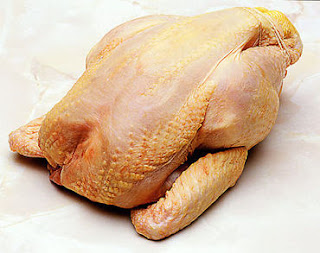 A 2009 USDA study found that 87 percent of chicken carcasses tested positive for E. coli after chilling and just prior to packaging.

In addition, results of extensive lab testing by Physicians Committee for Responsible Medicine "revealed that 48 percent of all chicken samples tested positive for feces.

Among skinless breasts, 49 percent of products were contaminated, compared with 28 percent of breasts with skin intact, indicating that skin removal did not reduce fecal contamination in the samples tested."

Further, USDA testing of its new inspector-cutback policies shows that Salmonella infection rates of poultry from plants using  the planned new rules "were higher than the rates in comparably sized plants that received conventional inspection."


Salmonella and Campylobacter bacteria can cause fever, diarrhea, abdominal cramping and other food poisoning symptoms in otherwise healthy people, and can potentially be life-threatening.

The USDA permits today's bacterial levels in supermarket chickens, thus transferring the onus (and liability) to the home cook to deter consumption of disease-causing infections... through ultra-sanitary handling and high cooking temperatures for long periods.

"The development of the 'ready-to-cook broiler' in the 1950s added convenience while introducing risk, under the assumption that end-to-end refrigeration and thorough cooking would provide adequate protection. E. coli can be killed by proper cooking times, but there is still some risk associated with it, and its near-ubiquity in commercially farmed chicken is troubling to some," per Wikipedia.

And consider this ugly, unappetizing fact: "Applying high cooking heat to poultry products does not remove the feces, it merely cooks it along with the muscle tissue."

So yes, I'm nauseous at the thought of buying, handling, and particularly serving these contaminated industrial food products.

And that's before one even considers the antibiotics, growth hormones, arsenic-laced chicken feed, artificial "yellow" coloring, and other drugs present in supermarket poultry. Or before a concoction of chemical "chicken flavor" is injected into chicken carcasses rendered flavorless by industrial processing...

What's a Chicken-Loving Consumer to Do? 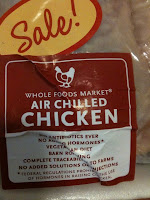 Buy air-chilled chickens, which can be found at many better butchers and Whole Foods these days. And buy organic if at all possible.

Worried about the family budget? My family's solution has become to serve very high-quality meats, but only three times weekly (plus leftovers!).

But please... for your health and that of your loved ones... bypass supermarket chickens. They're a particularly disgusting food product of the industrial fake-food industry.

Posted by Deborah White at 8:40 AM