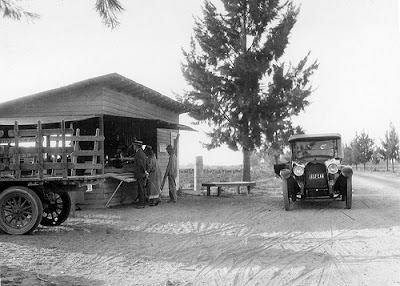 On sunny Saturdays in the early 1920s, they and husbands Gordon and Victor would drive a Model T Ford down eleven miles of dusty roads south from their Whittier homes to Walter and Cordelia Knott's roadside berry stand in Orange County, California.  Sunday suppers by the Kansas-born sisters featured homemade preserves and pies vivid with flavors of Knott's berries.

By 1927, the industrious Knott farm employed up to 50 seasonal pickers, and often yielded four crop rotations a year for berries, cherry rhubarb, and asparagus.

And Walter had finally persuaded Cordelia to set-up batches of her popular, pure berry jams, jellies, and preserves to sell at the berry stand.  Gertrude and Clara, who were busy mothers, housewives, and yearned for travel adventures by car, rarely again made homemade preserves.

The rest is Southern California history:


"Knott's great berries were a 'must stop and buy some' for both old friends and for travelers and tourists who had heard the good news by word of mouth...

"The big Depression hit then, in 1928,  but the Knotts responded positively by using the last of their savings to build the Farm's first permanent building--- a combined berry market,  a small mursery to sell berry plants, and a five-table Tea Room where Cordelia served sandwiches, hot biscuits with berry jam, and berry pie."  (Source - Knott's Berry Farm Cookbook, 1976) 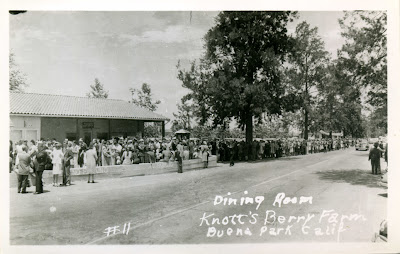 Walter built small amusements to entertain customers while they waited hours to dine: first a rock garden and a replica of George Washington's fireplace, followed by a gift shop and an old Wells Fargo stagecoach. By the 1940s, Walter Knott embarked on rebuilding an American West ghost town, replete with relics from the California Gold Rush.

A Business Built on Real Foods

Knott's, though, was built first on Walter's premium berries, and then on Cordelia Knott's extraordinary jams, jellies, and preserves made simply with the finest ingredients.  After Walter Knott innovated a new berry in the 1930s, the boysenberry, buyers returned in droves to try the unique fruit. 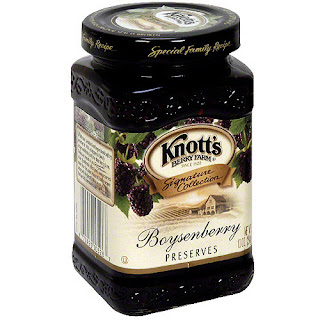 At every meal, my two great aunts, particular midwest-style cooks, always set on the table a pretty jelly dish or two of Knott's boysenberry, red raspberry, blackberry, or strawberry jam alongside a heaping plate of homebaked bread or hot biscuits.

One of my earliest childhood memories is of savoring the tangy, sweet tastes of delicious Knott's jams at the elegantly-set Sunday supper tables in the Whittier cottage-homes of Great Aunts Gertrude Bennett and Clara Hodgin. (Yes, they knew the Nixon family. Never thought much of the Nixon kids.)

As the Knott's Berry Farm franchise grew over decades, gift packs of Knott's top-quality jams and jellies were commonly given to family, friends, and even as company gifts to employees. Knott's products were special, and considered special occasion, gourmet treats.

But as of 2013, Knott's superb products are no more. Killed by industrial food mega-corporations, hungry to cheapen and undercut great American products for greater profitability.

In early 2013, Smuckers announced that Knott's-labeled preserves, jams, and jellies had been discontinued (except for token offerings at the Buena Park theme park).  That all Knott's jams, jellies, preserves and related products would bear the name of Smuckers...  a move that seems logical, considering that the high-quality ingredients and artisan-attention Cordelia Knott lavished on her pure, homespun fare had long since been compromised in favor of fake food sweeteners, additives, and processes.

Today, the ingredients listed for Smuckers Boysenberry Preserves, after boysenberries, are: 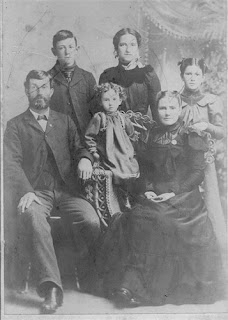 Great Aunts Gertrude and Clara would be appalled. At their Sunday supper table, they would never have stooped to serve these inferior tasting, processed-food substitutes for Cordelia Knott's fresh, crisp iconic American creations.

In honor of their family tradition of delicious, healthy meals made with fresh, high-quality food, I won't either.

(Great Aunt Clara is on the far right. Great Aunt Gertrude is standing center, back row. My maternal grandmother, Marie, their younger sister, is standing between my great grandparents. Photo was taken about 1900.)