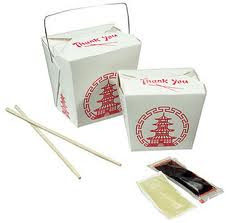 Those little packets of soy sauce with take-out Chinese fare? Not really soy sauce at all. Rarely contains even a drop of soy. Think 100% fake soy sauce.

Same for many soy sauces sold in U.S. grocery stores: fake, or with only traces of soy bean extract.

Genuine soy sauce is based on an ancient Japanese process of brewing wheat, soybeans, and a certain mold, then allowing the culture to ferment for months before refining and bottling.

The Japanese government has long been incensed by proliferation of imitation soy sauces, particularly by U.S. corporations. Japan has unsuccessfully pushed the United Nations food standards program to set an official international standard for soy sauce... a move that would mandate all imitations to be labeled as fakes, or as something else.

Fake soy sauces take only three days to manufacture, as opposed to three months of brewing and maturing, and, of course, are concocted from far cheaper ingredients which typically include:

"...  produced by boiling cereals or legumes, such as soy, corn, or wheat, in hydrochloric acid and then neutralizing the solution with sodium hydroxide. The acid hydrolyzes, or breaks down, the protein in vegetables into their component amino acids. The resulting dark coloured liquid contains, among other amino acids, glutamic acid, which imparts an umami flavor...

In rare, and horrifying, instances, Chinese workshops use human hair as a source for soy sauce proteins.


"China Central Television (CCTV), the state television station, first raised public worries over the quality of domestic soy sauce by uncovering a substandard workshop in central China's Hubei Province, where piles of waste human hair were found. The hairs were treated in special containers to distill amino acid, the most common substance contained in soybean sauce.

"Human hair is rich in protein content, just like soybean, wheat and bran, the conventional and legally accepted raw ingredients for the production of soy sauce." (Source - Boing Boing, May 26, 2004)


"We highly recommend that you look for a soy sauce that is traditionally made. Also, it's important to find one that doesn't have artificial colors or flavors, including caramel coloring. Many supermarkets and Asian groceries now offer these additive-free varieties; natural food stores also are a very good source for them...

"For soy sauce produced in other countries like Japan, Korea, China, or Indonesia, even though the likelihood of genetic modification might be less, we still like certified organic soy sauce due to the lower risk of unwanted contaminants like pesticides." 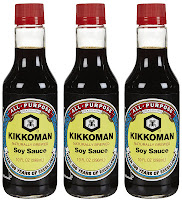 There's (apparently) good news, though, for we who shop mainly at the local chain grocery store: one brand, Kikkoman All-Purpose Naturally Brewed Soy Sauce, is the real deal.

I say "apparently" because I'm skeptical: a best-selling national brand, prepared without fillers, "flavor enhancers," emulsifiers, artificial colors and flavorings?  In today's industrial-dominated fake-food America, such a high-quality commercial product would be an anomaly.


"Kikkoman began exporting soy sauce to the U.S. in the 1800s. In 1972, to meet the growing demand for naturally brewed soy sauce in the United States, Kikkoman opened its Walworth, Wisconsin, brewing plant in the heart of America's wheat and soybean country. In 1998, a second plant was opened in Folsom, California."

The only ingredients on the label of Kikkoman All-Purpose Naturally Brewed Soy Sauce are:

Kikkoman All-Purpose Naturally Brewed Soy Sauce is not certified organic, and almost undoubtedly uses genetically-modified soybeans. But it's not  loaded with corn syrups and other sugars, artificial flavors and colorings, or other hallmarks of fake soy sauce.

Posted by Deborah White at 1:21 PM