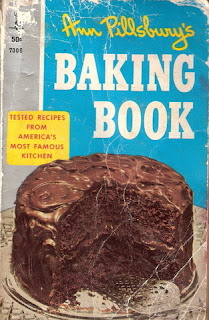 In 2013, home cooking is a radical act that empowers Americans to bypass the near-total control over the U.S. food supply of about twenty industrial food mega-corporations.


"... one of the most striking things I’ve learned is that all traditional food cultures keep populations healthy no matter what they are... The great irony is that now our civilization has managed to construct a new food culture that reliably makes people sick. It’s the first time in history...

"But the collapse of home cooking is limiting for the food movement. As I watched this local agriculture movement get started, I realized that the farmers’-market movement was only going to get so far if people refused to cook."

That doesn't mean, though, that you need resort to your grandmother's cherished baking cookbooks.  (See above from my mid-20th century cookbook collection, "Ann Pillsbury's Baking Book," which was near-revolutionary when published in 1950 with "more than 400... rolls, cakes, cookies. and pies.")

Grandmother's baking was comforting and delicious beyond mere words, of course, but her recipes were complex, and a bit too fussy and old-fashioned for most 2013 home bakers. 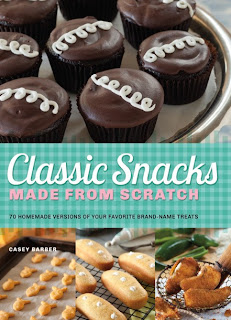 A brand-new book that I'm crazy about is "Classic Snacks Made from Scratch: 70 Homemade Versions of Your Favorite Brand-Name Treats"

by Casey Barber, a recipe developer and food writer.

Using good-quality ingredients and absolutely no additives or preservatives, this fun book enables all to bake better-quality, equally yummy versions of...

No, none of these snack vices will be approved by stiff-necked nutritionists.

But if you or yours have to have it... and we all do now and then... reject the cheaper, chemical-sodden ingredients used by greedy industrial food mega-corporations.

Join the rebellion by returning to your grandmother's ritual of baking at home.  She'd be so pleased!

Posted by Deborah White at 5:10 PM