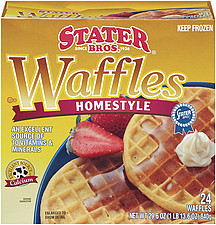 I get it. I get why health-conscious Americans sometimes serve fake food at home. I get it, because I did it.

Frozen waffles doused and drenched but not disguised. Our seven-year-old pronounced them  "Awesome. Really awesome!"

My excuse? I was in a hurry at the market, and besides, I knew the kids couldn't wait the time it takes to properly mix and make waffles from scratch. They have fun things to do, favorite places to go, and they'd be hungry.

At the market, I hid the frozen waffle box, fearing disapproval of fellow shoppers. What if I ran into friends or neighbors? What would they think?  That I feed fake industrial-made foods to my family? That I secretly binge on fake foods? They know I blog to expose the worst of modern industrial fake foods. Will they brand me a health hypocrite?

Embarrassed, I slid the bright gold box under a sheath of red-leaf romaine lettuce, heirloom tomatoes, organic apricot-plum hybrids, and a loaf of cracked wheat sunflower-seed dill bread in an artisan-baker bag made of crinkly recycled paper.  I made it home, my food crime undetected.


I was correct about the fake food inside the box festooned with legally meaningless phrases ("Excellent source of 10 vitamins and minerals"): the frozen "homestyle waffles" are a sodium-laden concoction of chemicals, flour and water. Little listed that my farm wife grandmother would have recognized as ingredients for her waffles. Included on the label:


And in very fine print, "Product of Canada." The implication? Just 1.3% of food imported into the U.S. is inspected for anything, including truth or completeness of ingredient labels. (See details at  U.S. Food Supply Injures More Americans than Gun Violence Each Year.) 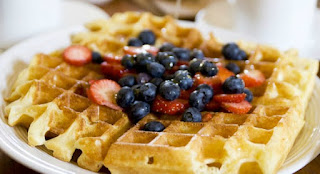 But I could have done better by them.  I could have bought quality ingredients... fresh eggs, organic milk, unbleached flour... and invested time to make hearty waffles worthy of my grandmother's tradition. I could have pre-made and frozen waffles to pop in the toaster for quicker serving to busy children. I could have served the waffles with fresh fruit, not syrup. But I didn't.

I get it.  I get why health-conscious Americans sometimes serve fake food at home. I'll do better next time....

Oh, a second confession: I, too, munched on generic frozen toaster waffles. Our seven-year-old  was right. They tasted awesome.

Posted by Deborah White at 1:58 PM