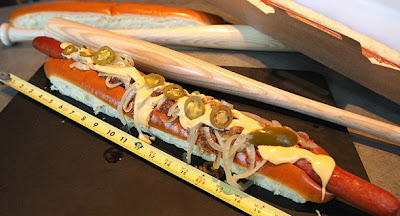 American tradition embraces juicy hot dogs and cold, cold beer at the ballpark, but when did a stadium visit become another exercise in over-the-top, self-destructive gastronomy?

Call me naive about stadium food, because the ballpark in my neighborhood, Anaheim Stadium, emphasizes healthy choices including:

Sure, the home of the Anaheim Angels of Los Angeles (future 2013 World Series champions!) offers heavy, satisfying fare for fans as pastrami, cheese steak, and meatball sandwiches, and gigantic, deliciously greasy pizzas by-the-slice.  And like every ballpark, Anaheim serves heaping piles of  "nacho" chips dripping with hot, yellow, liquid "cheese" topped with jalapeno peppers and God only knows what else. (Why my husband craves ballpark nachos, I will never, ever know...)

My point is that, in my recent stadium experiences, the direction of food concessions has been toward healthier fare, less to conspicuous gluttony.

So imagine my delighted surprise when I recently read a headline in my father-in-law's morning newspaper, the Reno Gazette-Journal, touting "Aces Chef to Debut Tasty Treats."  Terrific, I thought. Healthier foods at the stadium for the Reno Aces, a popular Triple-A baseball team affiliated with the Arizona Diamondbacks.  A ballpark with an actual chef on staff! 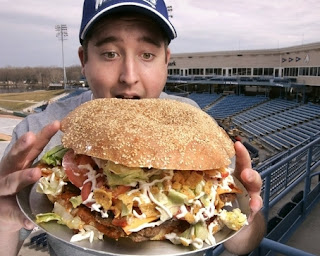 Delighted surprise until I read the article, that is. Among the new tasty treats? A foot-long hot dog smothered in chili and Fritos.  Pretzels slathered with "beer cheese." (Liquid beer cheese? What is beer cheese?) And sweet potato tater tots, deep-fried of course.

A single Google search of stadium foods turned up, at the Texas Rangers' ballpark, a $26, two-foot hot dog weighing a full pound, dripping with that yellow liquid cheese substance, jalapenos, onions, and likely whatever else suits your food fantasies.  (See photo above.)

Has ballpark eating become the newest venue of rebellious, indigestion-inducing indulgence akin to county fair in-your-face gluttony as entertainment?  If so, shouldn't hungry fans at least be told the calorie, fat, salt, and sugar content of their food options?

I believe in freedom of individual choice, yet recognize that in a responsible, safe society, individual freedoms must be balanced with public responsibilities and privileges. In the case of stadium foods and similar, public health concerns must be weighed against individual choice.

The fast food industry is required by law to disclose the nutritional content of its menus, so that the public can make informed choices.

The time is overdue to also mandate nutritional content disclosures of the tens of millions of meals and snacks sold annually at U.S. stadiums and ballparks.  Take me out to the ballpark, but please, tell me what I'm eating.