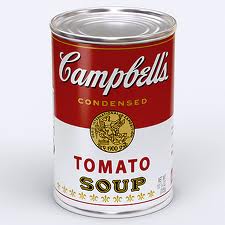 Andy Warhol painted it. The Paris Exposition awarded it the Gold Medallion for excellence in 1900.

American mothers have served it to children for over 100 years. My husband craves it when he's sick. Or busy at work.

In 2012, Campbell's Tomato Soup still ranks as one of the top ten selling dry grocery items in U.S. grocery markets.

Truth be known, it's fairly healthy, too, for canned, modern industrial food.  No fat, no cholesterol, no fake colors or flavors. Laced with minerals, iron and Vitamin C. An entire can... two servings... is only 270 calories (before requisite grilled cheese sandwich).

Campbell's has added a generous dose of high fructose corn syrup (i.e. sugar) to please America's sweet tooth. And all canned soups are inherently very high in sodium (i.e. salt). Clearly, canned soups are second best to homemade in both taste and nutrition.

The soup in Campbell's Tomato Soup isn't the health hazard. It's the can.

Campbell's Soup Co., now a profit-hungry multinational corporation with $7.7 billion in annual sales, is one of the major food manufacturers to still line its cans with bisphenol-A (BPA), a hormone-disrupting chemical that can leach from can linings into the foods held inside.


Per the Harvard University School of Public Health in November 2011:


"Exposure to the endocrine-disrupting chemical BPA, used in the lining of metal food and beverage cans, has been shown to interfere with reproductive development in animals and has been linked with cardiovascular disease, diabetes, and obesity in humans...

"A new study... has found that a group of volunteers who consumed a serving of canned soup each day for five days had a more than 1,000% increase in urinary bisphenol A (BPA) concentrations compared with when the same individuals consumed fresh soup daily for five days.

" 'Previous studies have linked elevated BPA levels with adverse health effects. The next step was to figure out how people are getting exposed to BPA. We’ve known for a while that drinking beverages that have been stored in certain hard plastics can increase the amount of BPA in your body. This study suggests that canned foods may be an even greater concern, especially given their wide use,' said Jenny Carwile, a doctoral student in the Department of Epidemiology..."

Brace yourselves, tomato soup fans: the highest levels of BPA are found in tomato-based soups, pastas and canned goods because the natural acidity of tomatoes accelerates erosion of the can lining.

Ban Mulled by FDA, Already Banned in Other Countries
BPA has been banned by Canada, Japan, Denmark, Turkey, and France.

The FDA promised, then  failed to rule on BPA by June 2011. Sued by the Natural Resources Defense Council,  the FDA is mulling a similar ban, which could be announced as soon as March 31, 2012. 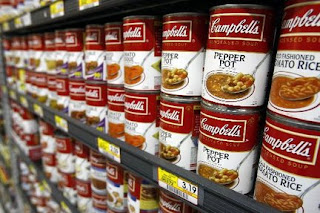 My guess is that the FDA, with its entrenched record of favoritism for manufacturers over consumers, will, at best, mandate a very lengthy period to phase-in any ban on BPA in the United States.

(Don't believe me? Per the Pulitzer Prize-winning Milwaukee Journal-Sentinel, "A series of reports in the Journal Sentinel in 2007 and 2008 showed how government regulators relied on two industry-funded studies to claim that the chemical was safe.")

Meanwhile, Campbell's, under intense pressure from food activists,  finally announced two days ago that "the company... will make the transition as soon as 'feasible alternatives are available.'" Notice that the Campbell's spokesman excluded any mention of a timeline, or a definition of "feasible alternatives."


What's a Concerned Tomato Soup Lover to Do?
First, stop serving and consuming soups from cans lined with BPA. Do it now for your health and that of your loved ones.

Soups simmered from scratch, whether at home or a local eatery, are the healthiest (and yummiest!) alternatives. If freshly made soups aren't possible, buy soups and other goods in glass, pouches, or non-BPA cans.  Diligently look for the non-BPA designation on the cans.

Second, demand responsibility and public-minded behavior from the FDA and U.S. food manufacturers. Complain to the FDA, to Campbell's Soup Co., and to your Congress members and U.S. senators. Complain loudly.

Third, click HERE to sign a Campbell's: Stop Endangering Kids' Health! petition at Change.org demanding that "Campbell’s to stop being an industry laggard and start protecting kids’ health. This petition is in support of the Breast Cancer Fund's "Cans not Cancer" campaign.

Grocery stores carry delicious alternatives to every product offered by Campbell's. And remember... fresh produce and homemade soups are your best-quality alternative.

Check back here for updates on Campbell's Soup Co.'s use of BPA-laden cans.

Posted by Deborah White at 5:38 PM