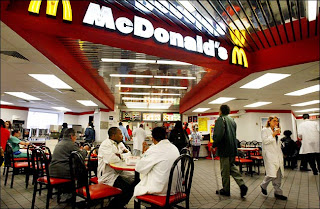 Grab a Big Mac, large fries, and Coke as you exit a hospital after a heart attack scare? After all, you're exhausted and in a hurry, detest bland hospital fare... and what the heck, you deserve a break today, to use McDonald's famed slogan.

Believe it or not, wrong. Twenty-two U.S. hospitals and medical centers... including the esteemed Cleveland Clinic in Ohio, the Naval Medical Center in San Diego, and Texas Children's Hospital in Houston... permit full-service McDonald's stores on hospital premises.


The respected Physicians Committee for Responsible Medicine is appalled and angry, and has joined forces with Corporate Accountability International to demand that these supposed guardians of public health "end your contract with McDonald’s and to take action to remove the McDonald’s restaurant from your hospital."


"On behalf of thousands of health professionals who work daily to improve public health..., we are calling on you to help curb the epidemic of diet-related disease and to stop fostering a food environment that promotes harm, not health...

"According to the Centers for Disease Control and Prevention, in the decades to come, one in three children will develop type 2 diabetes as a result of diets high in McDonald’s-style junk food...  Every day, parents, children, and health professionals turn to your institution for advice on well-being, for support in preventing and treating illness, and for sustaining a healthy community. As a hospital, you serve as a local authority on health, and as such, the community you serve looks to you and to your environment as a guide for their well being.

"However, in your role as a local health leader, you have allowed McDonald’s—a corporation that has disregarded public health in the name of profits—to operate within an environment devoted to helping our children get well." 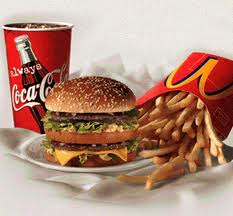 Money and profits are the only conceivable reasons for hospitals and medical centers to contract with McDonald':


Of course, good eating choices can be made at McDonald's. Observes Dartmouth College Professor Donella Meadows:

"McDonald's has added salads to its menu, and no-egg breakfasts and a no-fat-no-cholesterol apple bran muffin. It is replacing its soft-serve ice cream with low-fat frozen yogurt and sorbet. It has reduced the fat content of its milk and shakes, and it's working on reduced-oil salad dressings. It is currently running a 500-restaurant test of an all-vegetable shortening for french fries...

"That's nutritional progress. But a Big Mac with medium fries still gives you more sodium than you should have in an entire day of eating (plus 880 calories, over half of which come from fat). A single Egg McMuffin gives you three-fourths of your daily sodium allotment and 290 calories, a third of which come from fat. McDonald's prides itself on its special lettuce, which is picked a week early for better taste, but it also prides itself on an innovative packaging system that gives chopped lettuce a 10-day shelf life.

A restaurant with health as a top priority would not serve 10-day old lettuce, much less lettuce grown with pesticides..."

I agree with  Physicians Committee for Responsible Medicine and Corporate Accountability International  that it's no surprise that McDonald's wants their stores in hospitals. "After all, for decades, McDonald’s has attempted to co-opt the health community, to deflect blame for the epidemic of disease that it has helped drive, and to pose itself as part of the solution," reads their joint letter.

But hospitals and medical centers can obviously do better.

U.S. medical institutions are profit-strapped corporations facing profound business changes in their industry, but when they stray from their roles as public health leaders for the sake of profits... well, who needs them?   Maybe that's the time we radically rethink health care services delivery.

Posted by Deborah White at 3:46 PM