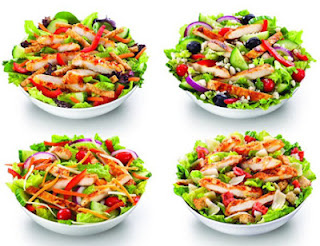 We're livid when car dealers attempt to lure us with bait-and-switch scams. We speak our minds forcefully when we get suckered into any fraud, major or miniscule, be it from useless coupons or crummy products to services that don't deliver.

Sears was actually forced by the FTC, in 1974, to "cease and desist" using  deceptive tactics to draw customers into stores, then "switch their focus to products other than the advertised bargains." For the sake of sales and profits, of course.

So why, then, do we allow fast food mega-corporations to deliberately fool us with the specter of fresh, healthy salads, when most of their mouth-watering "salad" concoctions are among the highest-calorie, saltiest, least healthy menu items?

Busy, beleaguered parents or grandparents of young kids are far more likely to order from McDonald's, Arby's Taco Bell, Jack-in-the-Box, KFC, and the like if they can order healthier for themselves. Or believe they are ordering healthier... The reality is jarring: 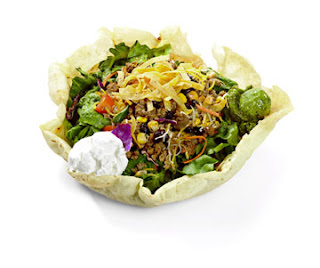 I resent that these mega-corporations subtly and not-so-subtly present them as healthier choices, when these fast food salads are awful nutritional alternatives.

I resent that they hide behind website-only nutritional disclosure lists that are difficult to locate, much less decipher. I resent their intentional corporate campaigns to purposely fool consumers into buying these products.

I resent this legal form of fast food bait-and-switch that succeeds because of its great convenience to our fast-lane lives.

Americans are angry when car dealers and small-scale fraudsters mislead us into buying products under false premises. Why aren't we angrier about being misled into chowing-down these fast food corporate-designed "salads" that clearly hurt our health and well-being?

Posted by Deborah White at 3:06 PM